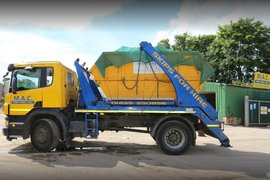 A skip hire company based in Tamworth has been fined £60,000 after a worker died due to failures led to her being crushed between two vehicles.

On 4th November 2015, the driver, who worked for MAC Skip Hire Limited, was helping another employee to load a piece of carpet into her lorry from a shovel loader. During completion of the task, the carpet became lodged against the top edge of the nearside of the lorry, causing an obstruction. When the operator of the shovel loader failed to release the carpet, the lorry driver got out of her vehicle to attempt to move the carpet, but was not wearing any high visibility clothing at the time.

Following the incident, an investigation carried out by the Health and Safety Executive (HSE), found that MAC Skip Hire Limited had failed to implement and follow systems and site rules for loading operations on their site. The HSE stated that as a result of these failings, the company had also failed to ensure safe segregation of pedestrians and vehicles on site.

HSE Inspector, Mark Austin, commented on the case, “This was a tragic and wholly avoidable incident, caused by the failure to ensure that basic site controls and rules were being managed and enforced, such that pedestrians were not at risk from those large vehicles working in the area.”