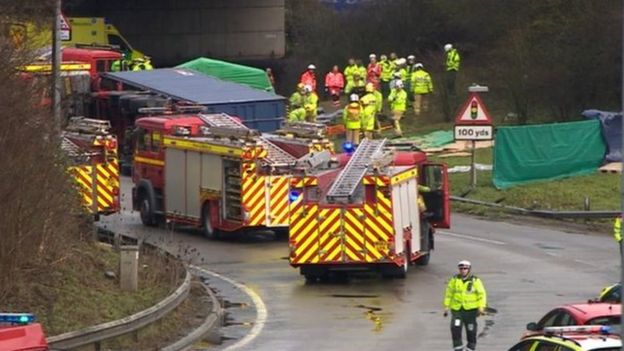 The cause of death of a 60-year woman who was killed by a lorry load has been revealed to be due to poor loading and a lack of knowledge of correct loading.

In January 2015 the victim, Lorraine McKeag, was killed during a traffic collision at a roundabout linking two motorways near Bristol. The collision was caused by a poorly loaded HGV which was carrying a container filled with cardboard, which crushed Mrs McKeag on impact, making her unable to breathe. Paramedics were called to the scene but she was pronounced dead once the container had been removed from her vehicle.

An investigation into the incident found that little care had been taken when the cardboard had been loaded into the metal cargo container on the LGV. Ian Jefferies, the lift truck driver responsible for loading the lorry, told investigators that the pallets were often different sizes, shapes and weights and fitting them into a container was ‘a bit like a jigsaw puzzle’. Mr Jefferies admitted that he felt the cardboard had been packed well, but he had not received any training or guidance on correct loading techniques.

Police investigating the incident commented that gaps were found between the cardboard stacks which showed the load could move around freely and some stacks of the cardboard were secured with only one single band. It was concluded that the cause of the accident was due to the way in which the lorry had been loaded which was of a low standard.