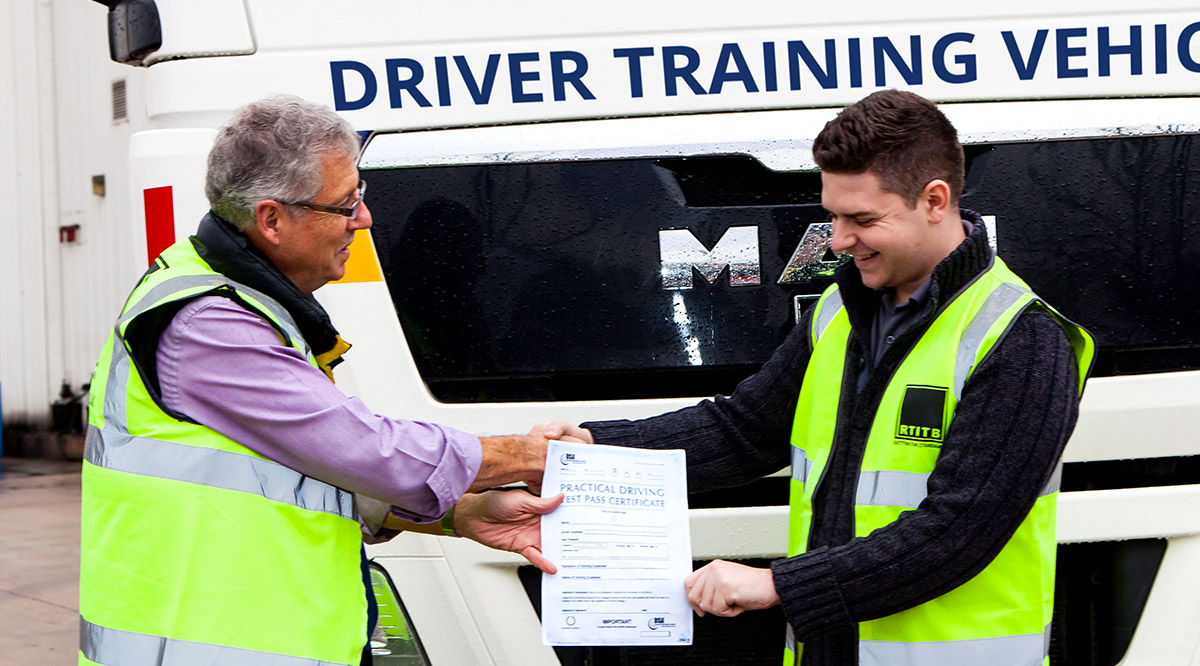 OK, so HGV driver training is on the agenda. It’s down to you. You’ve looked at the options, the permutations, the potential consequences and you’ve decided it’s a minefield. You’re absolutely right. Whether you’re looking into HGV driver training for yourself or for potential new drivers at your company, it’s a big decision and there’s a lot to consider. Hopefully, this quick tour through the maze will help you arrive at the right outcome.

First off, there’s never been a better time to look at driver training, there’s a lot of HGV driver jobs out there. Thanks to the driver shortage that we’ve been experiencing here in the UK over the last few years, there’s plenty of work to go around, but the last year has seen competition increase as both the number of people taking Category C and C+E tests (or class one and class two as they’re sometimes called), and the number of people passing have risen. In the year to March 31 2016, the number of Category C test passes rose to 53%, while C+E passes rose to 55.9%. The pass rate is climbing, but even so, that’s still a pretty low chance of passing compared to how much it could cost, so it makes sense to know the facts before diving in.

There’s no doubt that this is a big commitment, both in time and money. It’s never been more important to ensure you see a return on every penny, which is why it will really pay to understand the licence acquisition process and the role of Driver CPC. So grab a coffee, find a comfy spot and read on. By the time you reach the bottom of the cup you’ll be in a better position to start getting things organised.

Provisional licences, medicals and other things you need to think about right away

The first thing you, or the prospective new driver – let’s call him Bob for now – needs to think about is a provisional licence. In the interests of keeping things simple, we’ll assume that Bob has never driven anything other than his trusty Astra and he’s looking to get a Category C (rigid vehicle over 3.5 tonnes) licence. But before you do anything, we have to think about Bob’s age.

HGV licence holders (by the way, you’ll often hear HGV and LGV used interchangeably; they are the same thing, although some people mistakenly think LGV means light goods vehicle) must be at least 18 years of age. Simple, right? Yes, but drivers between 18 and 21 must complete an Initial Driver CPC qualification.

Quick whistle-stop tour through the jargon: HGV driver training breaks down into 4 modules which, when put together, form the Initial Driver CPC qualification. Two of the modules, 1 and 3, relate to the actual process of getting the licence entitlement. The other two modules, 2 and 4, relate to the professional driver qualification (the CPC bit). Drivers aged 18-21 and drivers who want to drive professionally for a living must complete all 4 modules. Anyone over 21 who just wants an HGV licence so that they can drive the vehicle for personal use only (not for a job) needs modules 1 and 3.

I know what you’re thinking: the numbering makes no sense. You’re absolutely right, but it’s the system.

The other thing to think about before filling out the provisional licence application is health. Before he does anything else, Bob will need to sort out a medical – he can do this himself or his company/training provider can organise it for him. Here comes the first form and the first bill. Bob will need to take Form D4 with him when he goes for the medical. Have a look at DVLA leaflet INF4D for more on D4 and the medical. The medical will cost between £50-£120.

Once the medical is completed, Bob is on his way to a provisional licence, although he’ll have to fill in another form (D2) and send it to DVLA Swansea, along with his completed D4 and photo card driving licence. The application process can take 10-14 days, so it’s a good time to start getting stuck into the theory needed for Modules 1 and 2.

The first part of the licence acquisition process is a good old fashioned theory test and hazard perception test. These tests can only be booked once a provisional licence has been issued. Some training providers refer to the two parts of Module 1 as 1a and 1b, but quite frankly, adding any more letter and number combinations to the process just adds confusion.

We’ll look at training options later, but it is generally accepted that drivers will have to take on a bit of self-study to prep for these tests. Many training providers offer revision-style training to help prepare drivers for the tests. The DVSA’s official “LGV Theory Book” (£13-£25) and “Hazard Perception DVD-ROM” (£15) are recommended learning aids. Booking for these tests is completed online. Bob can book them himself or his employer/training provider can do it for him.

Once Bob has his Module 1 certificate, it’s valid for 2 years. He must complete Module 3 (the Practical Driving test) in that time. We mentioned earlier that driver training is a big investment. At this point in the process, with one module complete, Bob’s HGV training cost is around £200.

This test can be booked at the same time as Module 1. Some training providers put Module 2 under the “Theory” heading. It is a theory test, but it’s separate from the Module 1 Theory test because it is the first part of the Certificate of Professional Competence (CPC) qualification that drivers must have to drive professionally, so it’s almost a separate issue to Modules 1 and 3.

During the Case Study test, Bob will be asked a series of questions based around several case studies. There are 7 case studies in the test, each with 6-8 questions. Case studies might include video, audio, text or diagrams. The test must be taken at an official DVSA Test Centre and costs £23. As with Theory training, many training providers offer training for this test and a range of useful learning aids are available online.

The final part of the licence acquisition test. This is where Bob gets behind the wheel and takes the actual driving test. This test must be taken within 2 years of passing Module 1.

Naturally, this is where the majority of your investment will go. Training a brand new driver will typically take around 5 days. It’s an intense learning experience with a big test at the end, so you need to be sure your candidate is up to the task. Training for Module 3 will cost approximately £800-£1500, depending on geography, deals, duration, etc. Good training providers will want to speak to you on the phone and maybe conduct a pre-training assessment to get an idea of training duration before quoting.

The test itself lasts around 90 minutes and Bob will need to carry out a reversing exercise and prove what he can do on a number of different road types. The test is conducted by a DVSA Examiner and costs £115.

The final part of the CPC Initial qualification (needed by all 18-21 year olds and professional drivers). Often this part of the process is conducted straight after the Practical Driving test, but approaches may vary. Module 4 is also a practical test, but it’s not a driving test; it’s a “practical assessment of associated knowledge”. In other words, Bob will have to demonstrate his knowledge and understanding of certain vehicle-related issues like daily inspection, safety, load restraints, etc. The important thing is that this test is about demonstrating, not talking or explaining. The examiner wants to see that the candidate knows how to actually do the job not just talk about it.

It is recommended that candidates receive some training for this test because it is quite particular in its structure and marking. Bob will need to score 80% overall, but in each subject area he must score at least 75%. This test will cost £55.

So that’s it! Four modules completed and Bob is a free man. Qualified and good to hit the road.

Not quite. He’s got a licence entitlement and a professional qualification (he’ll get a Driver Qualification Card for passing Modules 2 and 4, which he’ll need to carry on him), but now he has to maintain that qualification. Over the next 5 years he will need to complete 35 hours of CPC Periodic Training (think of it as 7 hours of refresher training each year).

So far, as a very rough estimate, the cost of putting Bob behind the wheel is £1500 (not taking into account Periodic Training). It is absolutely critical for the company’s benefit (or Bob’s, if he has footed the bill himself) that his journey through licence acquisition and the CPC Initial qualification gives him more than just a licence entitlement. The driver market is becoming more and more competitive. That’s why picking a training provider and deciding where to invest your training budget is so important. Do you want a driver who has passed a test, or do you want a driver who can drive and has picked up some valuable experience and skills along the way? From Bob’s point of view, he needs to see a return in the form of a career for his spend. So for him, too, getting those all-important skills as well as a licence is critical.

Deciding where to get training is a difficult process, but it pays to give it some thought and do a bit of research. First off, decide which modules you would like training for – it may be the case that you don’t need to find a training provider for some modules; self-study may be the way to go. For modules like 3 and 4, training is probably inevitable.

There are no hard and fast rules about picking training providers, but tread carefully. Never pick purely based on price. Investigate local providers thoroughly. Compare what they offer as well as how much it costs (if the price seems too good to be true, then it probably is). Look at pass rates (most providers advertise this online). Ask for recommendations from local businesses and your competitors even. Consider the condition of training providers’ vehicles and facilities – the chances are you see their vehicles driving around all the time. Always think about the added value of using one particular training provider over another – will they serve up more than just a pass?

There’s a lot of choice out there and it’s easy to be bamboozled by the ads offering discounts, freebies and incentives. Hold fire, be sure you understand the path to be followed and know what you want. Make a decision based on long term returns for both driver and employer.