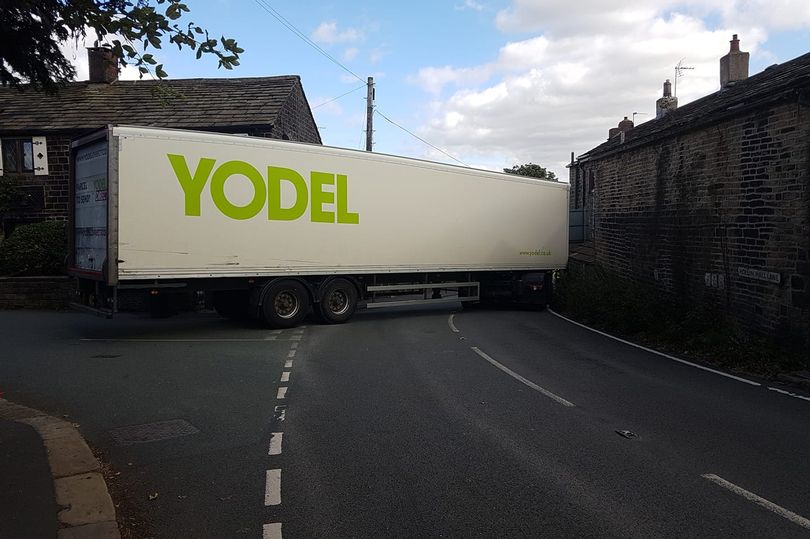 A Yodel lorry has crashed into a house, blocking a public road for several hours, after it was found the driver was relying on a satellite navigation to guide him through his route.

On Wednesday 12th September, the LGV was travelling a route between Huddersfield and North Kirklees. The driver was attempting an impossible turn out of North Gate, a narrow semi-rural route, in order to reach his destination near Mirfield town centre, using roads which were unsuitable for large goods vehicles. As it tried to turn, the vehicle became lodged into wall and roof of a cottage.

Further investigation into the crash discovered that the driver of the vehicle has been using a sat-nav to complete his journey and had only been working for Yodel for three days.  The owner of the house in question reported that over a 10 year period his house had been hit at least 10 times by large goods vehicles.

Residents in the area have complained on multiple occasions about the route being used by delivery and logistics companies, in particular Yodel, who have breached the Kirklees Council 7.5 tonne weight limit by using this particular route. Lorries are known for having limited across in this area due to low bridges and difficult turns. Ironically, the lorry crashed next to a warning sign about the dangers of lorries over this weight colliding with the neighbouring buildings.

The crash caused significant traffic disruption, which included an ambulance who was required to divert and use an alternative route. A resident of the area commented that as a surge in LGV’s using the route was noticed, a complaint was made to Yodel in May of this year, with a report made to the council. Following this incident, the resident also contacted the Health and Safety Executive (HSE), commenting that a plan was required before a more serious incident occurred.

Commenting on the crash, Kirklees Council commented “We have been working to try and alleviate this issue, and have been in contact with both Yodel and the company they are delivering to, to encourage them to use the most suitable route available, which may not necessarily be the most direct, or that which their sat-nav recommends. There is a HGV restriction on this road, but some HGVs have legitimate right to use Hopton Lane, to gain access to premises south of the railway line in Mirfield, as they have no option because of the low bridges.

It’s vital that employers invest in training that prepares drivers for tricky routes and remove the mantra of relying on sat-navs to guide them through their route. Incidents involving LGVs who get stuck after following electronic navigations cost thousands of pounds in damages, in addition to posing a huge risk to other road users and pedestrians. Read our blog on why sat-nav technology cannot replace HGV driver training.

Source: The Huddersfield Daily Examiner, This house has been hit by lorries TEN times in ten years, 13th September 2018. Read the full article.